Joe Reilly at CKCU in Ottawa turned over his hour-long show ‘Guest List’ to the new ‘Red Rover’ album, with a Kyp Harness interview about the tunes and his books —

Video for ‘ain’t gonna go down with your ship, mate’ from ‘you can walk on water’

‘Talking to Myself’ from the album ‘Kyp Harness:

“An artist at the heights of his creative vision” – Joel Thomas Hynes, 2018 Governor General Award winner for fiction, ‘We’ll All be Burnt in Our Beds One Night” 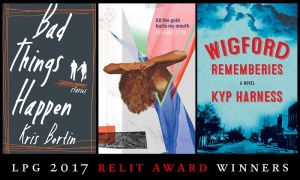 Congrats to Kyp Harness! His novel WIGFORD REMEMBERIES is a finalist for the RELIT AWARD! #relit #novel

K-Har Records glad to release ‘Kyp Harness’s Greatest Hits’ with a special show on August 6 at the Tranzac.  The cult songwriter who counts among his fans Daniel Lanois, Ron Sexsmith and Mary Margaret O’Hara has picked out 14 fan favourites from his 13 independently- released albums, tracks featuring such local luminaries as Bob Wiseman, Paul Linklater, Dale Morningstar and the Dinner is Ruined, Ron Sexsmith, Don Kerr, and David Matheson. 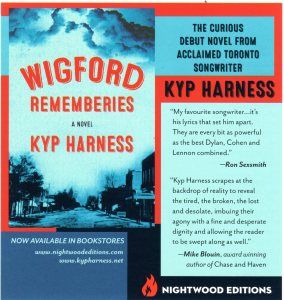 Globe and Mail: “…a unique voice and a poet’s flow. Pen in hand, there seems to be nothing Harness cannot do.”

Broken Pencil: “It takes an artist to craft such beautifully readable nihilism; Wigford Rememberies is an excellent novel.”

“Sheer brilliance…This is a remarkably beautiful but haunting work and stylistically audacious. It’s as if James Joyce, William Faulkner, Ernest Hemingway and Malcolm Lowry collaborated on a literary portrait of a fictional small town —with maybe a little Rod Serling thrown in.” – East York Chronicle

“For those in your posse who prefer their prose to be poetic:

“Wigford Rememberies by Kyp Harness. His way with words and ear for dialogue put you smack dab in the middle of a small town Canadian farmhouse kitchen. Written by a Canadian singer and songwriter, the characters will continue to haunt you long after you’ve think you’ve left them behind.” – Inside the Nut Blog:

“Kyp Harness’ prose has a unique flow: word and action, thought and thing are all contiguous and combined in lovely braided sentences.  There’s some Joyce splashed around Wigford, a satisfying read.  This is a fantastic book.  Please just read it.”

– Tony Burgess, author of Idaho Winter, finalist for the Trillium award and author of Pontypool Changes Everything.

“Harness uses his creative writing style to paint a clear picture of each scene, successfully drawing readers into the novel by making it seem as though they were silent onlookers in the lives of the characters.

Evocative and thought-provoking, Wigford Rememberies takes us through the realities of love, loss and life while still managing to impart humorous interludes throughout.” – Beaches Metro

“Wigford Rememberies by Kyp Harness is a novel about a small town, full of small, interconnected stories. It is somehow hilarious, subtle and epic all at once. It is masterful, which is surprising for a first novel, but he has been a brilliant, underappreciated songwriter for 25 years.” – Don Kerr of ‘Communism’

“Kyp Harness is one of those people of whom it could be said when he was born they threw away the mould!  refreshingly different…” – Americana UK

“Some writers can put a whole world in one song” – CBC

Wigford Rememberies’, a novel by Kyp Harness, will be published in Spring 2016 by Nightwood Editions

A ‘Mini-Doc’ by Simon Hochmann:

Here’s a new song, ‘All I Need’, from the upcoming album, ‘Stoplight Moon’ produced by John Critchley

Video by Dustin Kuypers, creator of the upcoming documentary, ‘Who is Kyp Harness?’

Today’s the release of ‘Greatest Sensations’ – a 23 track ‘Best Of’ compilation in time for Xmas, thanks to Porterbeach Records, Amatish music and others, and to the production/playing talents of Dale Morningstar, Don Kerr, Bob Wiseman, David Pedliham, Paul Linklater and others — Including a new track/song ‘I Hurt’, played solo – yours to stream or download for a nominal fee.

“A Toronto version of a Lucinda Williams or a Nick Cave…he’s a stone genius.” – CBC

“He’s as smart and natural a writer as our Nation has to offer.” –  Herohill.

Harness albums Welcome to the Revolution, The Miracle Business, and The Floating World can be listened to here

Buy it on iTunes – Purchase the CD at Maple Music! And in Toronto: at Soundscapes, Sonic Boom, and Sunrise Records (Yonge & Dundas and Yonge & Bloor locations).

Welcome to the home of Toronto singer-songwriter and author, Kyp Harness

Artist Bob Wiseman blogs on Kyp’s song Chemical Valley :”Kyp has written an inspiring canon of songs that cover the heart and the heart attack”

Start Anew – from ‘The Wrong Way’

“Wickedly funny, a little spooky, and captivating straight through,” says CBC’s Bob Mersereau in his review.  “Kyp Harness is the kind of guy you want to follow down the street writing down everything he says, in case he drops a great line he won’t be using.  Words and ideas seem to swirl from him, almost fully formed straight from mind to disc.  I’m sure there’s some editing and lots of thought put into it, but there’s a stream-of-conscious feel to his performance, a sense of immediacy and adventure, and you get the feeling he doesn’t quite know where its going but something’s going to happen.  You like fine writing?  Kyp’s your guy. . . I want to quote from every cut here, because I keep discovering lines that make me gasp. Both these albums deserve repeated, frequent spins.”

“He’s as smart and natural a writer as our Nation has to offer. If you have ever swooned to Dylan, Kyp is an artist that can be viewed as a peer, not a disciple.  It’s rare to find a singer that sounds timeless, unique and still topical. Kyp manages to do all three, consistently.” – Herohill.

“There will be those that find the lyrical shadows and uncertainties that Kyp raises in his darker songs too much to handle. This is emphasised by an anguished and dejected delivery that adds a powerful feeling of desolation. Nonetheless if you enjoy songs that engage with their subject and find, as I did, that Kyp’s unique vocal style; an acquired taste that’s a touch Cohen-esque, is equally engaging then this ‘double’ is one for you.” – Folkwords (UK)

“By the time this Toronto troubadour has vented his spleen and told his tales, ability to carry a tune could be considered a frill.” – The Coast (Halifax)

Toronto’s Now Magazine has published an interview with Kyp about the albums – read the interview and hear portions of it here.

Some folks’ fave Kyp album, the double-disc ‘The Floating World’ now on iTunes.

Kyp’s album Resurrection Gold was chosen as one of the Top Ten of 2011 by Toronto ‘s Now Magazine.

“A Toronto version of a Lucinda Williams or a Nick Cave…he’s a stone genius.” – CBC

“One of the best records of the year…from start to finish, the power this records packs is remarkable.” – Herohill.com

“Oddball or genius? You decide…Harness has delivered a uniquely skewed minor masterpiece that allows him to sit proudly with the likes of Robyn Hitchcock.” – Americana UK

Blogger Paul Snooks wrote an appreciation of  Kyp – The Outsider of Canadian Music.

Kyp was asked for his advice on singing in the September/October edition of Canadian Musician magazine.  Read it here

Kyp wrote a piece on The Magnificent Ambersons, posted on Wellesnet.com

It’s the poetry of Allison Grayhurst!

Meanwhile, check out Kyp’s extensive catalogue of albums and books. Find lyrics and buy-me links on the various pages found through the navigation bar. Follow the link, too, to Kyp’s cartoon site: Mortimer the Slug. Thanks for dropping by!